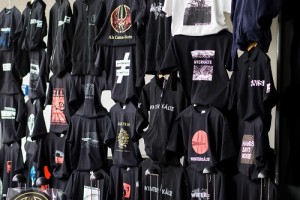 Bands without record deals and independent artists alike need to make the most of their gigs to maximise their earnings. Even big touring acts will try to make their additional cash flow at live performances as high as possible. This is because income generated from live music venues and promoters can be only enough to cover your costs as an independent band, in many cases. Therefore merchandising opportunities should always be exploited when performing. Let your crowd know that you have merchandising available. Of course, many bands have CDs and T-shirts for sale at their gigs, but you can generate a lot more interest in your merchandising stall by being a bit offbeat with what you might sell. Not only does innovative merchandise help you to stand out from the run-of-the-mill band and – potentially at least – generate more sales, but it will also help to get your band’s name out there and noticed that bit more. Here are some innovative band merchandise ideas that will help you to stand out:

Who listens to CDs these days? Although many bands still have CDs as a part of their offering at concerts, not many of us actually consume our music in this format any more. Of course, someone who purchases a CD of your recordings at a gig is likely to rip it to a computer or an audio player when they get home, but why put them to the trouble? Instead of selling CDs why not opt for USB memory sticks which have all of your band’s audio files loaded onto them? Not only will you be able to have your audio stored in an MP3 format and ready to go, but you can also have other promotional material loaded on to them, such as your press photos and band contact details.

Offering something that can be worn by your growing fan base is always a good idea, but why not offer something different from the plain old T-shirt which nearly every artist has. Produce a short run of bandanas featuring your band or act’s name. Because they can be worn in a variety of ways, they are a very good and gender neutral item of clothing. Whether they are tied around the wrist, neck or worn over the head like a scarf, a band bandana will help to make your band’s brand to stand out from the crowd and they are often cheaper than T-shirts, too.

The business part of the music scene can put many musicians off, so the idea of getting some business cards printed is one that may seem counter-intuitive at first. Nevertheless, having something to hand after a gig which has your band’s website, contact details and logo on can really help you build awareness. Have you ever been greeted with a friendly, “Great gig, man” when you come off-stage? Having a business card at the ready helps to connect with fans and potential new promoters alike. It is so much better than scratching around for a pen and writing your band’s name down on the back of a beer mat!

These giveaways are not so great if you are in an electro pop duo or a vocal harmony group, but indie rockers and heavy metal bands can really benefit from plectrums which feature the band logo and perhaps the website address. Branded plectrums are, it should be said, only little pieces of plastic, but what could say more about your ability to rock than a guitar-related freebie?

These days, vinyl is making something of a comeback. The one problem with records is that you still need to physically transport them around to be able to sell them. Twenty years ago, this might have meant dropping off copies in your nearby record stores, but there are very few of them left nowadays, in any case. As a result, selling vinyl to the music fans who really want it is only possible when you are there in person. In short, this means at record fairs or at gigs. If your fans are asking when you will produce a record, perhaps it is time to think about actually doing so.

Having tour posters, even when you are not really on a tour but stringing a series of gigs together, is a good idea to help promoters advertise your events. However, when you produce these, with your artwork and photography set out to make your band look cool, print a few more off than you might actually need. Then you will be able to sell them at your merch stall at gigs as ‘tour exclusives’. If the band sign them, then they will already stand out from the ones used by promoters and you can even personalise them by addressing them to whoever happens to be buying one.

Not got anything physical that you can give away or sell at a gig? If you have nothing else, then you should have your instruments and your creativity. If you are good at writing songs, then you ought to be able to string a few chords and a simple melody together for a fan and improvise a simple song for them, perhaps something that has rhymes based on the customer’s name. Okay, it may never be a hit, but a personalised song – even if it is done for a bit of fun – can make for a highly memorable and innovative means of generating band income.

When selling your merchandise, always try to use a highly-lit area where fans can see what is on offer. Remember to have some change available and – above all – keep an eye on your cash.