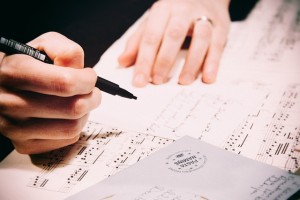 Writing a song can seem like an ambitious project for a beginner to take on. If you are new to learning an instrument, then you may not be able to even play a song through fully yet. Nonetheless, writing a song does not necessarily mean that you have to be a skilled musician. Nor do you need the ability to write the music down. Simply recording it is enough to have written a song in a way that other musicians can pick up on. Remember that song writing is not arranging where all of the musical parts and groove are laid out in a fully organised way. At it’s heart, a song consists of lyrics and a melody, or tune. Along with this, most people would consider a simple harmony to be part of the song’s unique flavour and this is usually given as a straightforward chord structure. Here are 5 songwriting tips to get you started with how to write a song:

The only thing from stopping you from song writing is yourself. Learning more helps, but it is not essential, so get going and express your ideas in one of the most rewarding ways that you can!